Maybe the only thing you’ve heard about Sardinia is its fabled Costa Smeralda, Emerald Coast, which takes its name from the color of the water that laps against its white-sand beaches. But there is a lot more to the rugged Mediterranean island than this sybaritic jet set paradise.

Tourists seeing Sardinia for the first time are surprised to discover that an island so well known for its outstanding beaches can be so rugged and mountainous only a few kilometers from the wave-washed sands.

The other thing that may surprise you is the staggering number of prehistoric sites, especially the enigmatic round stone towers known as nuraghi (singular: nuraghe). You’ll learn about the mysteries these prehistoric forts/dwellings hide as you climb their dark stone stairs and explore passageways built in the Bronze and Iron ages. You can also walk on original Roman streets and visit the windswept ruins of cities built by the Phoenicians.

Unique local customs and traditional festivals, attractions you’ll find no place else, a cuisine that’s quite distinct from the rest of Italy, even a different language (although everyone speaks Italian and many speak English) make Sardinia a one-of-a-kind destination. Discover the best things to do on this fascinating island with our list of the top attractions in Sardinia.

Most tourists begin their visit in the island capital of Cagliari, stopping at least to climb from Piazza della Costituzione to Bastione San Remy. Built to defend the Castello quarter, site of the beautiful cathedral and the stronghold of whoever controlled the city at the time, today they provide both historical and visual perspective, with sweeping views over the city and bay.

The southern coast of this island offers tourists a glimpse of Sardinia’s infinite variety. From the medieval streets and tall bastions of Cagliari, it’s only a few kilometers to the ruins of the ancient city of Nora, where Phoenicians, Carthaginians, and Romans had their trading posts. Head east from the city, and in minutes you can be sunning yourself on one of the fabled beaches that makes Sardinia one of Europe’s favorite summer playgrounds.

Within easy reach of Cagliari and the airport, and close to the archeological site of Nora, Forte Village Resort is a self-contained group of hotels overlooking the beach, with water sports, swimming pools, playgrounds, and other recreation facilities. Forte Village is one of the top-rated hotels and resorts in Sardinia.

Remains of literally thousands of these stone towers scatter throughout Sardinia, most in complete ruin, but this is the best preserved and most complete. It is also the closest major one to Cagliari, and the best interpreted, with 30-minute tours and English-speaking guides.

If you can see only one, see this one, which UNESCO cited as one of the best restorations anywhere in the Mediterranean. Timber found in the walls of the central tower was carbon dated to 1,500 BC, and the outer towers were built in the 11th or 12th century BC. You can go inside the tower, climbing to its upper reaches for a close-up view of the stacked dome made of dry stones without mortar.

Spiral stairways inside its 1.8-meter walls connect the three stories, and as you climb through the passageways, you can appreciate the finesse of the engineering and workmanship these prehistoric people achieved.

After exploring the towers and the foundations of the ancient village surrounding it, be sure to stop in the Casa Zapata Museum, in the village, where, along with other fascinating exhibits, you can see another nuraghe that has been excavated under the building. Here, you get a bird’s-eye view of the construction from a walkway above the walls.

From the port town of Olbia to the tip of Capo de Testa some of the world’s most beautiful beaches are set in craggy coves washed by a sea so green and clear that it’s known to the world as the Costa Smeralda, the Emerald Coast.

The comparison with one of the most expensive jewels might also apply to the clientele that has frequented the coast since it was developed by the Aga Khan in the 1960s into a series of resorts for the uber-wealthy. Cosseted resort “villages” are built to resemble Greek islands and the Riviera.

The center of all this is Porto Cervo, a resort village and marina for private yachts built in the 1960s. Apart from people-watching, its only attraction for those not booked into a resort there is MdM, a stylish modern art museum with changing exhibits and a terrace café overlooking Porto Cervo. The most modest resort town in the region is lively little Cannigione, on the Gulf of Arzachena.

The five-star L’ea Bianca Luxury Resort, near Porto Cervo, personifies the sybaritic lifestyle that made the Costa Smeralda famous, its smart rooms overlooking the sea from private balconies.

Don’t be surprised if the language you hear around you in this lively seaside city sounds a bit different-almost like Spanish. It is, and you may still find some signs and labels in Spanish, too. A 14th-century Pope gave Sardinia to the King of Aragon, hoping to wrest the island from control of Pisa and Genoa.

The king gave fiefdoms to about 400 families from Aragon and Catalonia if they would settle the island with a base in Alghero, displacing the local population. Mass in the church of San Francesco is still said in Catalan, and you should visit it to see the graceful 13th-century cloister, reached through the sacristy to the left of the altar.

The 14th-century cathedral has a Spanish Gothic doorway. As afternoon fades into evening, one of the popular things to do is climb the walls built by the Spanish to protect against attack by sea, and join locals for an evening promenade along their wide bastions to watch the sunset over the Mediterranean.

Another vantage point for watching the sunset is from a former private palazzo overlooking the sea, the old town bastions and beautiful Capo Caccia, Villa las Tronas Hotel & Spa was a favorite retreat of the Savoy royal family, and the service and accommodations are still fit for a king. 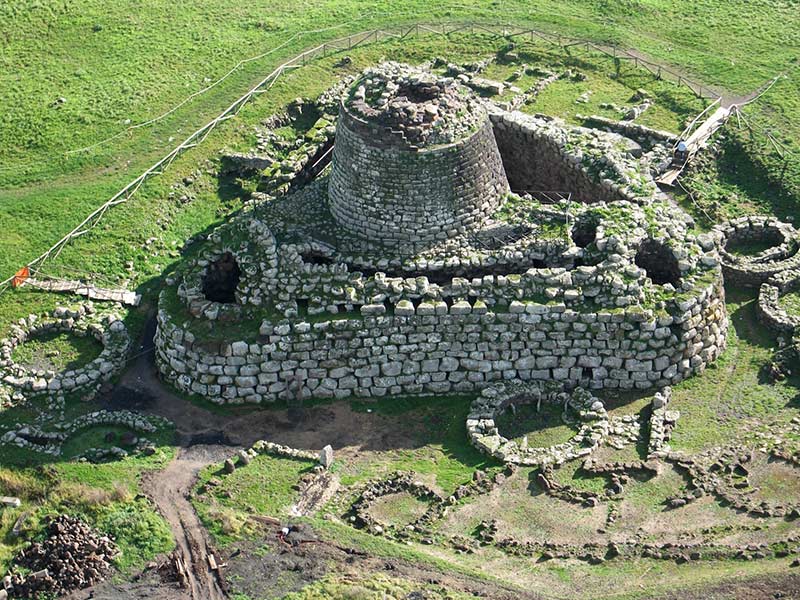 You may wonder if you need to stop at every nuraghe, and if you haven’t become fascinated with these mysterious towers by now, perhaps you shouldn’t. But most tourists quickly fall under the spell of these towers, of which so much remains unknown, and soon discover that each one is quite different.

Considered one of the three best, Losa has several distinctions. It is lighted inside by recessed lamps, so if you don’t carry a flashlight, this is your chance to see the interior details of its stacked stone thalos domes. It is one of the most complex, a large tower with three outer towers forming a triangular bastion, which you can explore through a maze of stone passageways that spiral up inside its massive walls.

The second floor is still intact and the roof complete. Although dating from about the 12th to 14th centuries BC (the Bronze Age), the large central room of the main tower is in excellent condition and more refined in its construction than most others. A tiny museum contains bronze bracelets and other artifacts found here.

Has lockdown changed the way we dress and our attitudes to fashion?